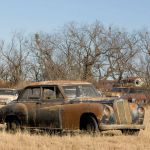 Built by hand as a one-off specimen in 1953, the last Horch ever to have been built now returns to Ingolstadt from Texas. This arresting story fuelled the desire among enthusiasts to see the car in its unrestored condition. Audi Tradition is now providing precisely that opportunity for a period of six weeks, starting July 8, at the Audi museum mobile – and thus kicks off the « ZeitLupe » exhibition series that will spotlight vehicles with a very special story.

The large velvet seats are slashed open, the headlining is ragged, the door trims look battered and the interior smells of musty upholstery and old wood. And yet the vehicle exudes a certain air of serenity. The rusty panelling has lost little of its substance. One senses the demeanour with which the only Horch ever to have been built at Ingolstadt rolled out of the workshop. It was intended for the man who was head of Auto Union GmbH at that time, Dr. Richard Bruhn.

The story of the last Horch began in 1953, when the man at the helm of Auto Union needed a suitably representative vehicle. This is how the DKW experimental department came to develop this chauffeur-driven limousine based on a 1938 Horch 830 BL. The vehicle was presented to Dr. Bruhn that June.

A US soldier stationed in Germany subsequently bought the one-off specimen and took it home with him to the States. Eventually the gearbox packed in and he parted company with the car. Al Wilson, a car enthusiast from San Angelo, Texas, saved the Horch from the crushers. Although he knew nothing about the Horch brand, he sensed that the vehicle was something special. So this former manager of a shoe factory paid 500 dollars for it and took it away.

The research now started. He contacted Ingolstadt, the Deutsches Museum in Munich and the Dresden-based expert Dr. Kirchberg – but nobody knew anything about the car. Al Wilson nevertheless kept it and just parked it on his property in Texas along with other finds. The Texan’s sons resumed the research process and finally Ralf Hornung, who is responsible for buying and restoring vehicles at Audi Tradition, recognised the car: « The photos clearly showed Bruhn’s car, the whereabouts of which had been a mystery for decades. » Hornung flew straight to Texas. Al Wilson agreed to sell it: « The Horch should go home. » Bruhn’s Horch has now arrived in Ingolstadt by container and the restoration work will soon begin. But first, Audi Tradition will be putting this unique specimen on display exactly as it reached the Audi museum mobile.

The four rings of the Audi badge symbolise the brands Audi, DKW, Horch and Wanderer, which were combined under the umbrella of Auto Union in 1932. Auto Union and NSU, which merged in 1969, made many significant contributions towards the development of the car. AUDI AG was formed from Audi NSU Auto Union AG in 1985. Together with the two traditional companies Auto Union GmbH and NSU GmbH, Audi Tradition nurtures and presents the deep and diverse history of Audi. The Audi museum mobile at the Audi Forum Ingolstadt is open daily from Monday to Sunday, from 9 a.m. to 6 p.m.